The Parental Rights Foundation this week reviewed the five latest AFCARS reports and uncovered some disturbing trends. According to the Adoption and Foster Care Analysis and Reporting System (AFCARS) summary of 2016 data released in October of last year and the four previous reports, the number of children in foster care nationwide has been trending upward since 2012, while the average age of children in foster care is trending down.

We know of far too many cases where families are invaded and divided when they shouldn’t be, which raises serious alarms when the foster care population rises. And the younger a child is taken into foster care, the more severely they will feel its negative effects throughout their life.

Further, parental rights are terminated at an alarming rate, with such judgments thrown around cavalierly as though they were not “the death sentence of family court.”

For all these reasons, we found the following most visible trends deeply troubling.

That’s more children separated from their homes, many of them unnecessarily. 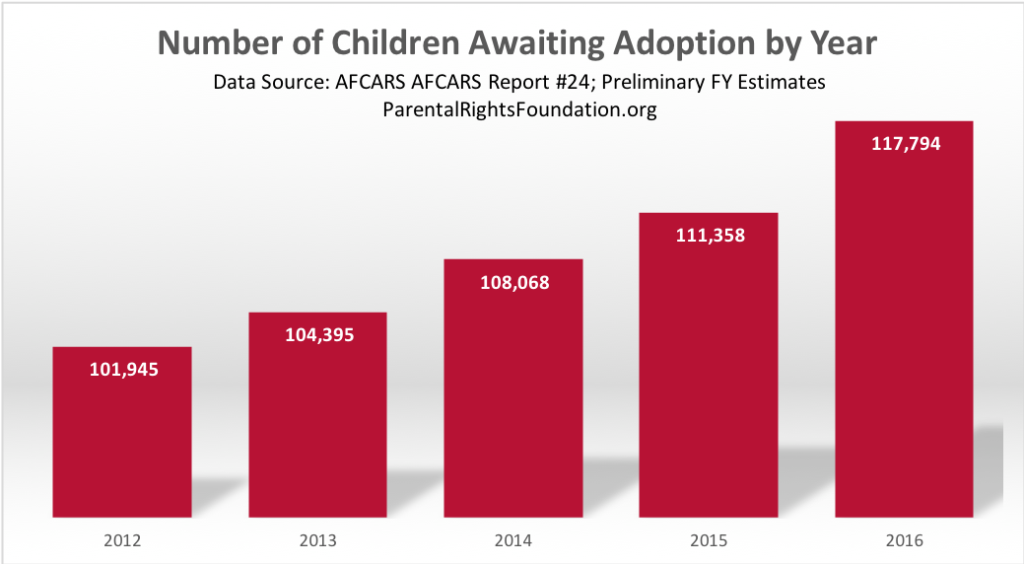 Perhaps not surprisingly, with more children going into foster care each year, we are also seeing more children awaiting adoption. In 2012, that number was 101,945. By 2016 it had risen—again, by a little each year—to 117,794. That’s a 15.5% increase in only 5 years, and mirrors a similar rise (11.3%) in the number of children whose parents’ rights to them have been terminated. 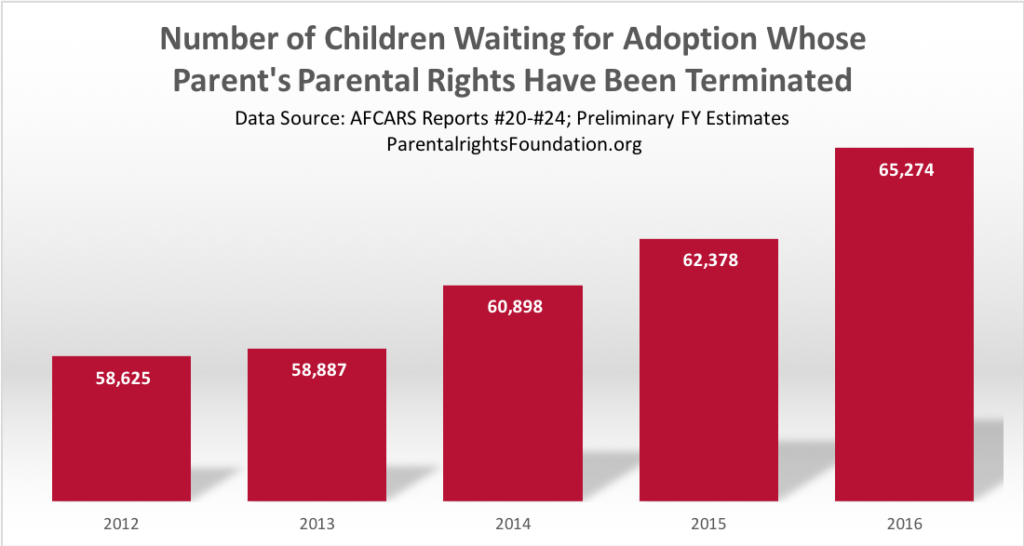 There is naturally a direct causal relationship between the two numbers: when parents’ rights are terminated, their children are put up for adoption as a matter of course. But the more of these cases there are, the more likely that many of them should never have happened at all. 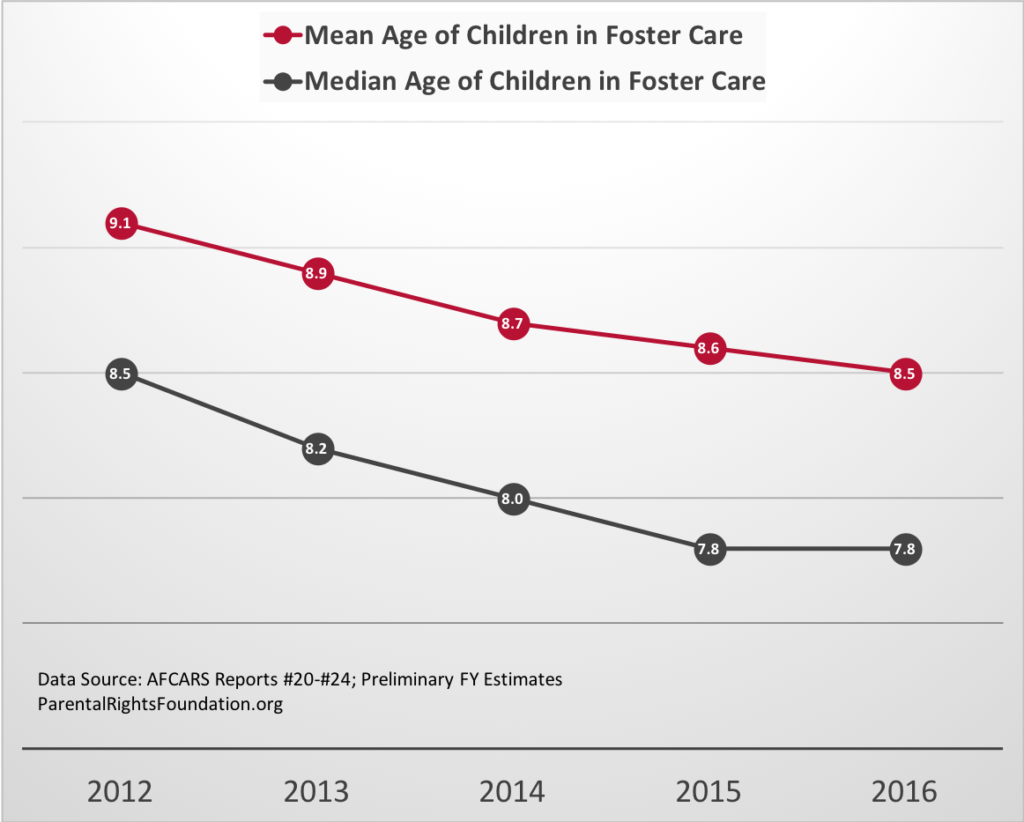 Equally unsettling, the average age of children in foster care is trending younger.

In 2012 the median age of a child in foster care was 8.5 years, and the mean was 9.1. Five years later, the median had fallen to 7.8 and the mean to 8.5. So while more children are taken into foster care, they are also being taken at younger ages—on average about 8 months younger.

There are many theories for why this could be, from “younger children are more adoptable” to the national opioid crisis, which is causing brand new moms to (understandably, if not always ideally) lose their drug-addicted newborns to the state. Most likely the trend is caused by more than one single issue.

We would doubtless be wise to steer clear of the speculation as to the cause of this trend. What we do know, however, thanks to Joseph Doyle of the Massachusetts Institute of Technology and the National Bureau of Economic Research, is the result: children removed from their families will down the road face higher rates of arrest, conviction, and imprisonment[1], delinquency, and teen birth, while attaining lower earnings as adults[2]. 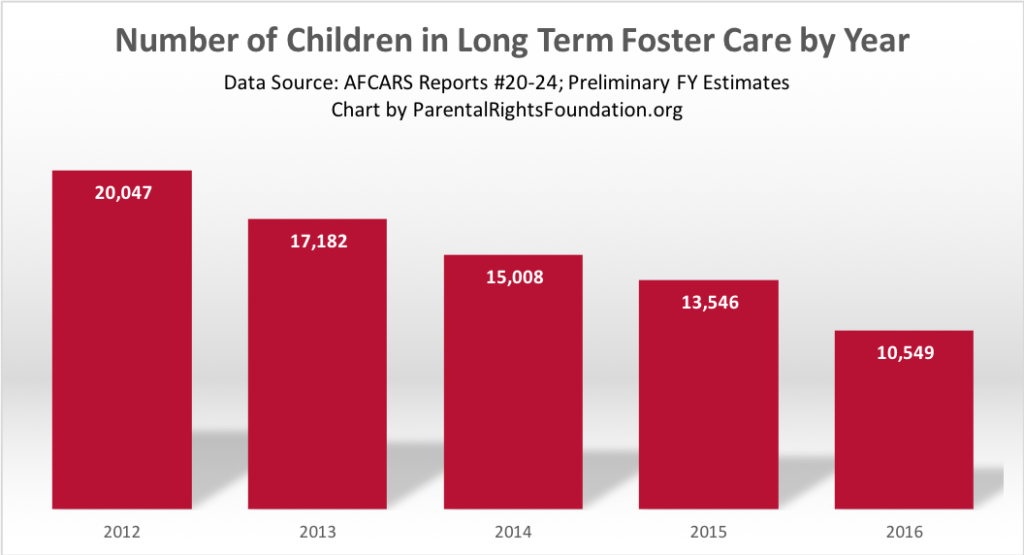 There is one bright spot in the AFCARS data: during a period where the total number of children in foster care has climbed by 10.2%, the number of cases with a case plan goal of “long term foster care” had dropped by almost half.

Personally, though, I am still baffled. In the matter of children separated from their families, and in light of federal regulations aimed to give every child “a forever home,” what justification is there for making a child’s end goal “long term foster care?” This sounds like a plan to leave a child without permanent roots or connections, forced to venture off into adulthood completely alone.

Of course, investigators know this, too. So the drop in this number could be a result of investigators designating some other case plan goal, but often with no other concrete plan in mind. It is good to see the number drop, but is that meaningful? And why is that number not zero?

Something Must Be Done: Take Action

It is conceivable that more children are legitimately in need of intervention than ever before. As the population increases, it is reasonable that the foster care population would rise along with it.

But we are unconvinced. For starters, the child population during this span hasn’t risen—it has decreased, albeit ever so slightly. Additionally, in light of the U.S. Department of Health and Human Services’ 2017 revelation that roughly 83% of all child abuse investigations each year are neither “indicated” nor “substantiated,”[3] one has to wonder just how many of these removals are really necessary in any population size.

Given Doyle’s data on the effects of foster care (cited above), we must demand lower foster care numbers. And since the negative effects are increased the younger a child enters the system, that downward trend in age must be reversed, too.

And there are too many termination of parental rights cases; children should never be permanently removed from fit parents , even if those parents are less than ideal. Yet we hear of more such cases every day.

In short, these trends are deeply concerning. Something must be done.

Of course some removals are necessary. It is a hated but inescapable truth that some parents abuse or neglect children. But as long as we rely on a system that hides behind a veil of secrecy, takes anonymous tips as evidence, and refuses to hold a parent’s rights in high regard, we will have to wonder:

How many of these children would be better served if the state just left their families alone?

You can help protect families by sharing this email and urging your friends and loved ones to join our mailing list at ParentalRightsFoundation.org. Together we can wake the nation to the abuses going on in secret courts all around us. The more who know, the sooner we can fix this problem and save our children.