Our nation has consistently maintained that parents possess a fundamental right to raise their children as they see fit.

This belief has been upheld in numerous Supreme Court cases that reflect the American people's longstanding commitment to parental rights. The excerpts below are drawn from key Supreme Court cases protecting the right of parents to raise their children. The principles below are referred to as the Parental Rights Doctrine.

It is the natural duty of the parent to give his children education suitable to their station in life.

The fundamental theory of liberty upon which all governments in this Union repose excludes any general power of the State to standardize its children by forcing them to accept instruction from public teachers only. The child is not the mere creature of the State; those who nurture him and direct his destiny have the right, coupled with the high duty, to recognize and prepare him for additional obligations.

It is cardinal with us that the custody, care and nurture of the child reside first in the parents, whose primary function and freedom include preparation for obligations the state can neither supply nor hinder. . . . It is in recognition of this that these decisions have respected the private realm of family life which the state cannot enter. 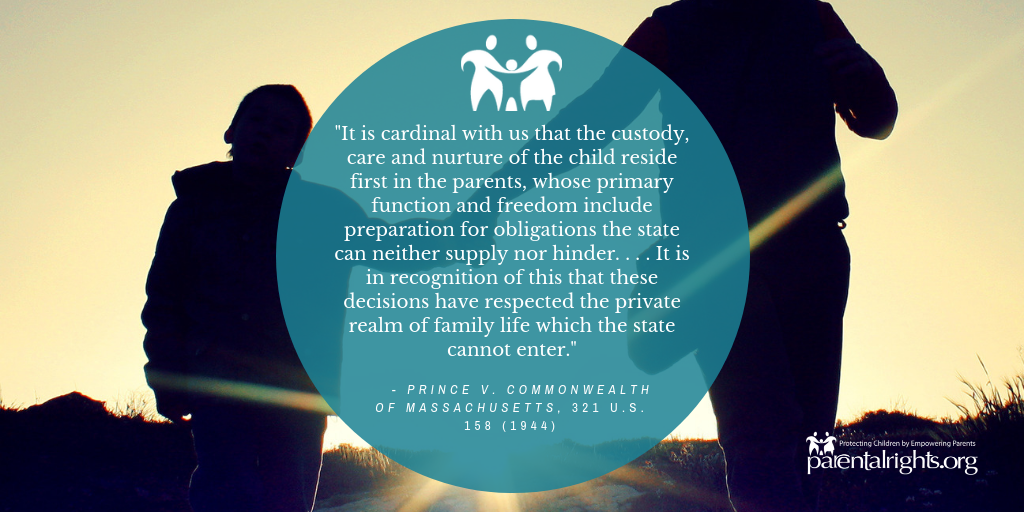 The values of parental direction of the religious upbringing and education of their children in their early and formative years have a high place in our society.

Even more markedly than in Prince, therefore, this case involves the fundamental interest of parents, as contrasted with that of the State, to guide the religious future and education of their children.

This Court has long recognized that freedom of personal choice in matters of marriage and family life is one of the liberties protected by the Due Process Clause of the Fourteenth Amendment.

Our decisions establish that the Constitution protects the sanctity of the family precisely because the institution of the family is deeply rooted in this Nation's history and tradition. It is through the family that we inculcate and pass down many of our most cherished values, moral and cultural.

The liberty interest in family privacy has its source, and its contours are ordinarily to be sought, not in state law, but in intrinsic human rights, as they have been understood in "this Nation's history and tradition."

We have recognized on numerous occasions that the relationship between parent and child is constitutionally protected.

We have little doubt that the Due Process Clause would be offended "if a State were to attempt to force the breakup of a natural family, over the objections of the parents and their children, without some showing of unfitness and for the sole reason that to do so was thought to be in the children's best interest."

The law's concept of the family rests on a presumption that parents possess what a child lacks in maturity, experience, and capacity for judgment required for making life's difficult decisions. More important, historically it has recognized that natural bonds of affection lead parents to act in the best interests of their children.

The statist notion that governmental power should supersede parental authority in all cases because some parents abuse and neglect children is repugnant to American tradition.

Simply because the decision of a parent is not agreeable to a child or because it involves risks does not automatically transfer the power to make that decision from the parents to some agency or officer of the state.

The fundamental liberty interest of natural parents in the care, custody, and management of their child does not evaporate simply because they have not been model parents or have lost temporary custody of their child to the State. Even when blood relationships are strained, parents retain a vital interest in preventing the irretrievable destruction of their family life.

Until the State proves parental unfitness, the child and his parents share a vital interest in preventing erroneous termination of their natural relationship.

"The best interests of the child," a venerable phrase familiar from divorce proceedings, is a proper and feasible criterion for making the decision as to which of two parents will be accorded custody. But it is not traditionally the sole criterion-much less the sole constitutional criterion-for other, less narrowly channeled judgments involving children, where their interests conflict in varying degrees with the interests of others.

In a long line of cases, we have held that, in addition to the specific freedoms protected by the Bill of Rights, the "liberty" specially protected by the Due Process Clause includes the rights . . . to direct the education and upbringing of one's children.

The Fourteenth Amendment "forbids the government to infringe ... 'fundamental' liberty interests of all, no matter what process is provided, unless the infringement is narrowly tailored to serve a compelling state interest."

The liberty interest at issue in this case-the interest of parents in the care, custody, and control of their children-is perhaps the oldest of the fundamental liberty interests recognized by this Court.

In light of this extensive precedent, it cannot now be doubted that the Due Process Clause of the Fourteenth Amendment protects the fundamental right of parents to make decisions concerning the care, custody, and control of their children.

The problem here is not that the Washington Superior Court intervened, but that when it did so, it gave no special weight at all to Granville's determination of her daughters' best interests. More importantly, it appears that the Superior Court applied exactly the opposite presumption.

The Due Process Clause does not permit a State to infringe on the fundamental right of parents to make childrearing decisions simply because a state judge believes a 'better' decision could be made.