A History of Parental Rights

The Supreme Court of the United States in 2000 declared that “the liberty interest…of parents in the care, custody, and control of their children is perhaps the oldest of the fundamental liberty interests recognized by [the] Court.” Troxel v. Granville, 530 U.S. 57 (2000), at 65. In fact, this right of parents to direct the upbringing, education, and care of their children predates the Court itself. It is a right that was already understood and acknowledged long before the United States came to be. 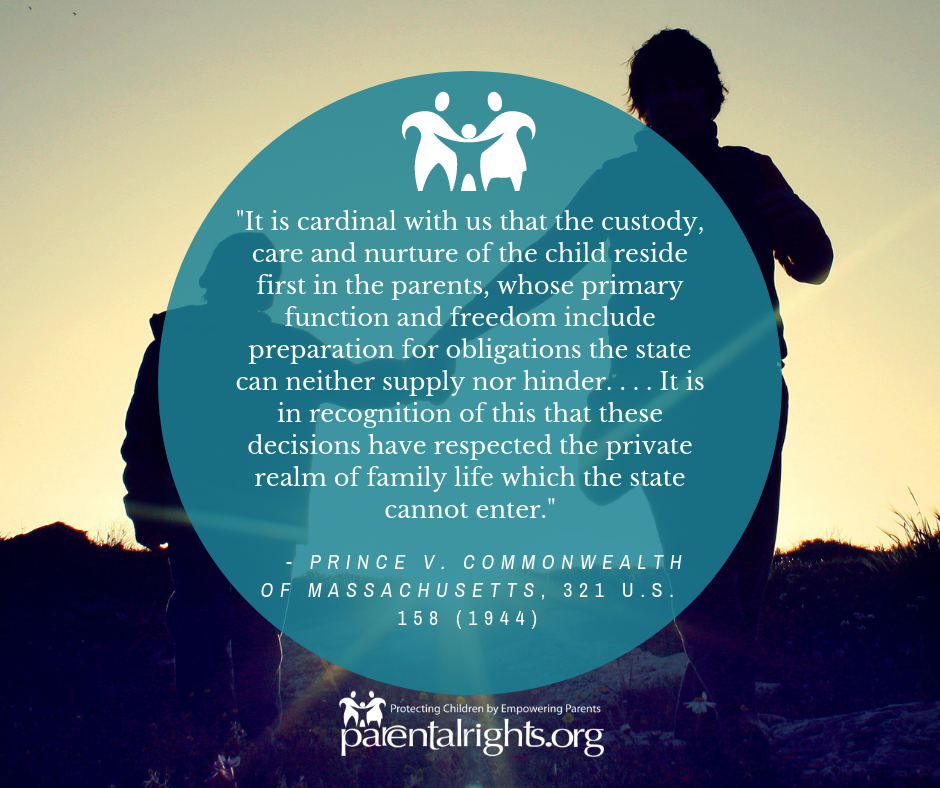 Consider the following from John Locke’s Second Treatise of Civil Government, first published in 1690 – that's 97 years before the ratification of the U.S. Constitution:

Adam was created a perfect man, his body and mind in full possession of their strength and reason, and so was capable, from the first instant of his being, to provide for his own support and preservation, and govern his action according to the dictates of the law of reason which God had implanted in him. From him the world is peopled with his descendants, who were all born infants, weak and helpless, without knowledge or understanding: but to supply the defects of this imperfect state, till the improvement of growth and age hath removed them, Adam and Eve, and after them all parents were, by the law of nature, under an obligation to preserve, nourish, and educate the children they had begotten; not as their own workmanship, but the workmanship of their own maker, the Almighty, to whom they were to be accountable for them….

This is that which puts the authority into the parents’ hands to govern the minority of their children. God hath made it their business to employ this care on their offspring, and hath placed in them suitable inclinations of tenderness and concern to temper this power, to apply it, as his wisdom designed it, to the children’s good, as long as they should need to be under it.

Locke’s understanding of the right and obligation of parents to direct the upbringing of their children appears to reflect the Common Law understanding of his day. It is a view that was shared, at least in its essential components, by the United States Supreme Court in one of its first articulations of parental rights in 1925:

The fundamental theory of liberty upon which all governments in this Union repose excludes any general power of the State to standardize its children by forcing them to accept instruction from public teachers only. The child is not the mere creature of the State; those who nurture him and direct his destiny have the right, coupled with the high duty, to recognize and prepare him for additional obligations.
Pierce v. Society of Sisters, 268 U.S. 510 (1925), at 535.

Further, his assertion that God (or nature, if the reader prefer) “hath placed in them suitable inclinations of tenderness and concern to temper this power, to apply it… to the children’s good” is echoed in a ruling by the Court in 1979:

The law’s concept of the family rests on a presumption that parents possess what a child lacks in maturity, experience, and capacity for judgment required for making life’s difficult decisions. More important, historically it has recognized that natural bonds of affection lead parents to act in the best interests of their children...

Most children, even in adolescence, simply are not able to make sound judgments concerning many decisions, including their need for medical care or treatment. Parents can and must make those judgments.
Parham v. J.R., 442 U.S. 584 (1979), at 602-3.

Thus, the understanding presented by Locke in the 17th Century was recognized by the Supreme Court in the 20th Century as the foundation upon which our nation’s parental rights law had been built.

It is no wonder, then, that in 1972 the Court also declared:

Unfortunately, it is a right that no longer enjoys the highest protection and respect of America’s politicians, the legal community, state and federal bureaucracies, state child protection agencies, and even the courts. It is a right that is under attack at some of the highest levels, such as at the United Nations, and international courts in the Hague and elsewhere. But it is a right worth protecting, and that is why the Parental Rights Foundation exists.