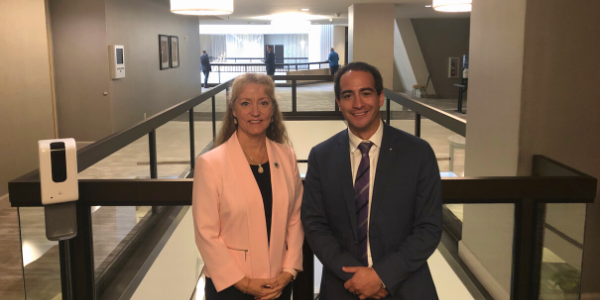 We recently shared with you about our work to introduce a model bill at the annual meeting of the American Legislative Exchange Council (ALEC) in Atlanta. Our model was drafted to ensure that innocent families know their legal rights when a child welfare investigator shows up at their door. The bill would help level the playing field and protect innocent families from overreaching and overbearing CPS investigators, while still ensuring that child abusers are prosecuted and that abused children are protected.

I am excited to report that our “Child Protection Investigations Reform Act” was adopted at ALEC’s annual meeting and will be an official ALEC model policy in just a few weeks. You can see the draft here. (Please note: several helpful amendments were included, so this is not the final version.)

Our president, Will Estrada, and our legislative sponsor, Louisiana State Representative Beryl Amedee, worked tirelessly both before and during the ALEC meeting to ensure that state legislators understood how important this bill was. And we are grateful to our friends who stood with us, because several legislators at the meeting tried to torpedo our model bill, thinking that any model bill that requires CPS investigators to inform parents of their rights should not be adopted.

This is not the first time we have worked on model legislation to protect innocent families during CPS investigations. Our new “Child Protection Investigations Reform Act” joins several others: our model bill to end anonymous reports of child abuse and neglect and replace them with confidential reporting; our model bill to ensure due process before a parent is put on a central registry of abuse or neglect; and Let Grow’s model bill that we support to ensure that reasonable parenting decisions are not considered “child neglect.” Many of these models have been introduced across the nation, and we have been proud to testify in favor of them and to work with our allies from across the political spectrum to see them become law.

And we are starting to do even more: because Will Estrada is both a lawyer and our president, he is leading the Parental Rights Foundation on an aggressive, proactive campaign to help innocent families who are undergoing unfair CPS investigations. He recently assisted another law firm in successfully helping an innocent family from Pennsylvania who was hotlined for child abuse simply because a relative disagreed with their faith. CPS closed the case as unfounded after a short investigation.

Will is also currently assisting a family from Oklahoma (through our associated local counsel Rick White with Barber & Bartz) with an administrative appeal after Oklahoma Child Welfare Services (CWS) found them to have medically neglected their son. This was CWS’s judgment (not that of a court or judge), even though their son’s doctors submitted letters to Oklahoma CWS stating that the family is following medical advice and is NOT neglecting their son’s medical care.

And we are partnering with numerous other allies and organizations in our work to ensure that innocent families are protected during CPS investigations. We’ll have more updates on this critical topic in the coming months.

At this time, we unfortunately do not have the ability to help every family in need. But we are putting in place a framework for our growing capacity to fight for innocent families and children as we receive more donations to support this critical work.

As always, thank you for standing with us in this vital family protection effort!