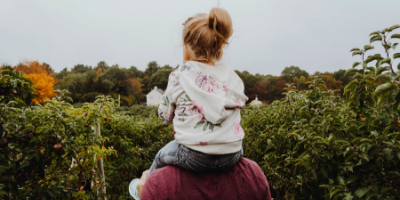 He’s all she has left in the world, but he can’t protect her alone. He’s going to need our help.

From the day she was born, Jaime (all names changed for privacy) was her dad’s princess and his world.

And even when things between parents Brad and April fell apart, they still worked together to raise Jaime, evenly dividing time and responsibilities.

Then, tragedy struck when April died suddenly, so Jaime went to live with her dad full time.

Yet, as it turns out, his daughter was a very popular little girl.

First, April’s bereaved parents wanted custody of their granddaughter. Worried they may never see her again now that she was with Brad full-time, they sued for visitation under Texas’s grandparent visitation statute.

(Brad had made no indication he intended to cut the grandparents from Jaime’s life; they simply feared he one day might.)

Yet, since Brad was a fit parent and still very much alive, their case was thrown out for lack of “standing.” That is, they had no legal right to override his parental decisions in court.

But then another plea was filed, another desperate attempt to steal custodial authority from Brad. And one very, I’ll say “creative,” judge made it work!

See, for the last several months of April’s life, she had a new fiancé (whom I’ll call John) and he lived with her. John shared April’s time with Jaime—that’s just about half the time, under her arrangement with Brad—for about ten months.

But now that April was gone, suddenly fiancé John “needed” partial custody of his late partner’s little girl—custody he could share with April’s parents, too.

It’s a convoluted case, and it threatens to crush an innocent father and his little girl.

You see, there is no question that Brad is a good father, no possibility of abuse or harm to Jaime. No, these people just decided that they had a right to legally take time away from her and her father. And, as you’ll see, the court let them do it.

Even more baffling, the very appeals court that ruled the grandparents did not have standing to sue for custody refused to throw out the later attempt to grant those same grandparents access through this other statute and in the name of the unrelated fiancé.

Desperate to protect his family, Brad appealed to the Supreme Court of Texas.

And that’s where the Parental Rights Foundation comes in.

When the Texas Supreme Court agreed to hear the case, Brad’s lawyers sought organizations to file amicus (“friend of the court”) briefs on behalf of the father, his rights, or parental rights in general.

As a nationwide organization, we were uniquely suited to provide to the court an overview of how parental rights are treated in other states.  It’s critical information the court needs to consider, but information which, due to word limits on briefs, the father’s lawyers had no room to add.

So we were there to add it for them.

And as the Parental Rights Foundation, a nationwide 501(c)(3) education and policy organization on parental rights, we had the name and expertise to be heard.

It is ridiculous to argue that an unrelated third party has power over a fit parent, when the US Supreme Court has found that even blood-related grandparents have no such power. And our brief shows that a majority of states fully agree with us on that.

It’s a huge consideration, and one we believe can help sway the Texas Supreme Court to protect this tiny family.

If they do, it’s a win for parental rights. But if they don’t, it could lead to an even bigger win.

That’s because this case is so big, and so clear-cut, that if Texas still denies this father his rights, he will take his case to the U.S. Supreme Court.

It would be the high court’s first real chance to correct the morass it created with it’s Troxel v. Granville ruling in 2000.

And if that happens, we need to be there—at the U.S. Supreme Court—to speak up for parental rights. We cannot afford a ruling that would dismantle all we have fought for a decade and more to preserve, all we have stood on for the last century.

As you know, we are completely donor funded. We don’t receive grants from the federal or any state government to help us do this work.

Can I count on you right now to make your best possible end-of-year, tax-deductible donation to the Parental Rights Foundation? Only with your help can we be ready in 2020 to prepare a brief for the U.S. Supreme Court if this Texas case goes up.

And that’s not all we’re working on.

I’ve just gotten back from the American Legislative Exchange Council (ALEC), where I shared plans to reform child welfare. We’ve drafted model language to require due process before a name is added to the child abuse registry, and another model to eliminate “anonymous reports” to child abuse hotlines—a tool by which anyone from a busybody neighbor to a jilted ex can turn child protective services into a weapon.

We’re also working to educate the American public, and to that end we will be launching our Parental Rights Podcast the first week of January.

We’ll open with our founding president, Michael Farris, on Tuesday, January 4, and we’ll follow with a new guest each week thereafter.

Some early guests include Jennifer Pelletier, who was there for the entire ordeal Boston Children’s Hospital and Massachusetts DCF put her sister Justina through, and Corey Widen, who had to endure a child welfare investigation for letting her 8-year-old walk the dog around the block.

And we’ll bring in scholars, too, like Professor Maxine Eichner, who is both a law professor at UNC and mother to a medically complex daughter.

We’re hoping their stories will not just entertain, but challenge, encourage, and educate the American people to stand up for parental rights.

In all these things, though, we need your support.

Today, will you invest your best gift of $25, $65, or even $125 to empower these efforts to educate the courts, our lawmakers, and the American public? (Get your gift in by December 31 if you wish to deduct it from your 2019 taxes.)

We can make 2020 our best year yet, drawing more attention to this vital cause than ever before. But we need your support to do it.

Without you we wouldn’t be here, and Brad and Jaime’s case would be weakened by our absence. Thank you for making the Parental Rights Foundation the kind of organization families like theirs can count on!

P.S.—Partners like you empower us to stand with families like Brad and Jaime’s, to educate the court on why this father and daughter, and countless others like them, must be kept together. You fuel our efforts to educate the courts through amicus briefs, lawmakers through model legislation for child welfare reform, and the general public through our coming podcasts.

Can I—and can they—count on you to share your best gift today to preserve their families and our parental rights?