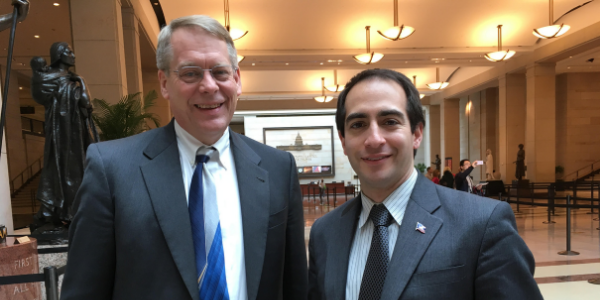 Happy new year! I wanted to take a moment to introduce our new president, Will Estrada, now that he has been leading ParentalRights.org and the Parental Rights Foundation for the last month. As we approach the fifteen-year anniversary of PRO, both Will and I thank you for how you have stood alongside us in our efforts to defend, protect, and advance parental rights across the nation.

The Journey to Now

As you saw late last year, we are thrilled to have Will Estrada join us as the first full-time president in the fifteen-year history of ParentalRights.org and the Parental Rights Foundation.

Will grew up in rural northern Pennsylvania, the oldest of eight kids, and was homeschooled by his mom and dad.

“My dad, a Puerto Rican who grew up in the Bronx, was a New York State special education teacher, ultimately serving 37 years with the state and becoming secretary of his AFL-CIO teachers’ union chapter. He has lots of crazy stories!” Will said with a laugh. “My mom, a second-generation Italian American who grew up in Brooklyn, gave up her career with IBM to stay home and homeschool my siblings and me.” Will’s admiration for his parents and their sacrifice of love as pioneer homeschoolers back in the 1980s comes through when he talks about them.

While he was in law school at Oak Brook College of Law and Government Policy, Will started as a legal assistant at Home School Legal Defense Association (HSLDA) in 2004. When he graduated from law school, he started as HSLDA’s director of federal relations, and ultimately worked for 14 years at HSLDA, including as a staff attorney. Will is a member of the California bar, the District of Columbia Bar, and the U.S. Supreme Court bar.

As an HSLDA attorney, Will handled numerous phone calls from terrified parents, as CPS workers and law enforcement were at their door responding to (oftentimes) anonymous and false allegations of abuse and neglect. Will also advocated for the federal Parental Rights Amendment to the US Constitution in our nation’s capital and fought hard against UN treaties that would hurt parental rights in our nation, give government bureaucrats more power over children, and surrender our nation’s hard-won sovereignty to the United Nations.

Along the way, Will got married to his wife Rachel (Will told me that they just celebrated their 15 year anniversary!) and they have two boys, Dominic and Merrick. Will and Rachel are homeschooling both their sons.

Will’s career took a turn in 2018, when he left HSLDA to take a job as a career federal employee in the Office for Civil Rights at the US Department of Health & Human Services. A new division, the Conscience and Religious Freedom Division, was being started; for the next three and a half years, Will served the American people doing civil rights law, serving through two presidential administrations and the global COVID-19 pandemic.

“I truly thought I would spend the rest of my career as a lawyer in the federal government,” Will explained. “But God had other plans. When the previous president, Jim Mason, who now serves as the Chairman of the Board of ParentalRights.org and the Parental Rights Foundation, called me out of the blue to see if I would be interested in leaving the federal government to become president of PRO and PRF, it wasn’t a hard decision. I truly believe that God has called all of us ‘for such a time as this,’ and answering the call to fight for the rights of moms and dads all over the nation was an easy decision. I’m thankful for the experience I’ve been able to gain over the years, at HSLDA and in the federal government, and I believe that God was preparing me for this moment.”

I asked Will what his vision was for ParentalRights.org and the Parental Rights Foundation.

“I am convinced that we are right in the middle of a sea change when it comes to parental rights,” Will said. “Everyone is talking about parental rights: in the news, at school board meetings, in state capitals, in our nation’s capital, at kitchen tables, and across the nation. And with your help, ParentalRights.org and the Parental Rights Foundation are going to aggressively fight at the local, state, and federal level to seize this moment to effect lasting protections for parental rights.”

“I love the mission statement of ParentalRights.org: ‘protecting children by empowering parents.’ We’re going to do it.”

I’m excited to have Will here with us at ParentalRights.org and the Parental Rights Foundation. And from my heart, thank you for standing with us. As state legislatures open in the coming days and weeks, we’re going to have our hands full. So, we thank you for answering the call to stand with us to protect parental rights!

Posted in Uncategorized and tagged #parentalrights, updates
Share This