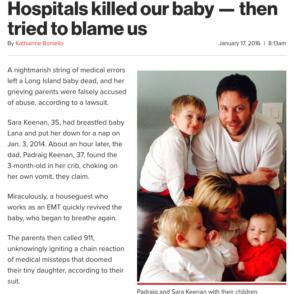 Sara and Padraig Keenan
A family in New York found themselves facing allegations of child abuse after their infant died; they contended the charge was fabricated to cover up the hospital’s own serious errors in the child’s treatment. The couple also had their older two children taken from their care, but returned after two autopsies of the baby showed no signs of criminality.

Posted in NewsTidbits and tagged hospital, medical
Share This